Are you planning for a last-minute barbeque and trying to grill a frozen steak on the grill? For years it was believed that thawing meat is indispensable before cooking. But do you know that modern culinary science has a different take on this? Unlike the traditional way, frozen steaks that are grilled directly turn out to be more evenly cooked and are more flavorful in taste.

Traditionally, thawing or defrosting is the first step to grilling a steak. This is followed by searing, seasoning, and grilling until the steak is evenly cooked in the interiors and caramelized on the exterior. The internal temperature of a well-done steak is ~160°F. You can also successfully cook a frozen steak directly on the grill. Frozen steaks are juicier and have less chance of overcooking.

Steaks are one of the easiest foods to cook. But what is the correct method of grilling frozen steaks? How do you check the doneness of grilled steaks? This guide will help you learn about how to perfectly cook frozen steak on the grill. 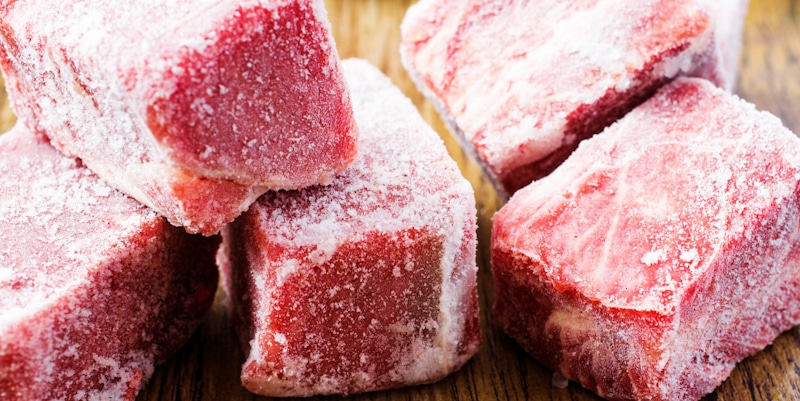 How To Thaw Frozen Steak For Grilling?

The way steak is prepared makes all the difference in the flavor and tenderness of the meat. In traditional grilling style, the first step to prepare a steak is ‘thawing.’ Thawing is the process to free the meat from accumulated ice. Two of the best methods to thaw frozen steak are:

If the steaks are stacked together, it will inevitably take longer to defrost. Watch this video to learn more about How To Grill a Frozen Steak.

Can You Cook A Frozen Steak Without Thawing?

Defrosting before cooking is recommended for most kinds of meat; however, steaks may be an exception here. Many pitmasters have discovered that when frozen steak is seared on a hot skillet for at least 90℉ per side and then transferred to a 275℉ warm oven until the internal temperature reaches 145℉ – the result turns out to be outstanding. However, do remember that frozen steaks may take a little longer to cook (about 15 to 20% more time) and lose less moisture (about 9%) than thawed meat.

While the outside of the frozen steak is getting seared, the extremely low temperature on the inside cooks the meat just at its optimum temperature. Such steaks have a uniform pink interior with little or less gray banding.

How To Grill A Frozen Steak

Here is a detailed guideline on how to grill a frozen steak:

Choose a thick-cut steak. Steaks that are 1 to 1 ½ inches thick (porterhouse,  t-bone, and rib eyes) work the best for grilling frozen steaks. Thinner steaks like flank and skirt may not be an ideal choice.

To grill straight from the box, steaks must be frozen individually. You can arrange the steaks on a baking sheet and freeze them overnight. If you are storing for a longer duration, freeze the steaks on a flat surface and store them in resealable freezer bags.

The process of grilling steaks involves three steps – ‘Searing,’ ‘Seasoning,’ and ‘Cooking.’ Once the steaks are ready to cook, you can grill, sear, reverse sear, broil, sear roast, or sous vide.

Sear – In this method, introduce the frozen steak to a pre-seasoned hot skillet and cook for about 5 to 7 minutes on each side  or until both sides are golden-brown in color. The heat should be relatively high, and the internal temperature should reach above 90 degrees Fahrenheit during the process. Searing gives a nice and crispy texture to the meat.

Next, season with minimum salt (preferably kosher salt), pepper, and oil to preserve the umami taste of the meat. Once the steak is seared, cook under indirect heat for about 15-20 minutes or until the target internal temperature is reached.

The doneness of steak can be estimated by measuring the internal temperature of the meat. Here’s a reference for the same:

The ‘pull temperature’ of grilled steak is about 5 degrees lower than the desired temperature. To fully cook the meat, make sure to let it rest for at least 5 minutes before serving. The practice of resting gives the time for the juices to redistribute in the steak. This prevents the meat from drying out and keeps it juicy and flavorful. Once done, cut the steak and serve with the preferred choice of side dish and bread.

Some Points To Consider For Grilling Steak From Frozen

More like this: Cooking Steak on a Pellet Grill

So next time when someone asks for a surprise BBQ party, steaks should definitely be the preferred choice on the menu.