Pellet grills are one of the best choices to produce the most succulent and juiciest steaks. Depending on how what texture you prefer, the steaks produced from a pellet grill are always cooked perfectly on the inside and have a beautiful brown crust on the outside.

Steak can be prepared on a pellet grill using the searing or reverse searing method. About 1 ½ to 2 inches of seasoned steak is either smoked first (in reverse searing method) at 180℉ to 220℉ or directly seared (traditional method) at 475℉ or 500℉ until the internal temperature reaches 155℉ (for well-done meat). Mesquite, Hickory, or Oakwood can be used to introduce a unique smoky flavor to the steaks.

Before you start preparing steaks, make sure you have enough time in hand. For preparing steak on a pellet grill it is not only important to choose the right type of meat and the pellet grill, but you must also follow the right cooking technique to produce the best steaks ever. Things Required For Cooking Steak On A Pellet Grill

The basic gears that are required to cook steaks on a pellet grill are:

What Temperature Do You Cook Steak On A Pellet Grill?

How Much Time Does It Take To Cook Steak On A Pellet Grill?

The cooking time depends upon the method used, temperature, and the thickness of the steaks. The total time required to sear sticks (flipping it halfway) are:

From procuring the meat to slicing and serving the steaks to your guests, the entire process will take at least 3-4 hours (½ hour for preparation, 2 hours of marination/seasoning, ~15-20 minutes of cooking time with the traditional searing method, and 5 minutes rest). Reverse searing with smoking will further increase the cooking time.

How To Cook Steak On A Pellet Grill?

If you are too scared of choosing the right seasoning for your steak, just go with a hint of salt and pepper to bring a nostalgic flavor to the meat. In fact, professional pitmasters recommend adding very little to preserve the unique umami taste of the steaks. Use kosher salt for better results. If you want to experiment with the taste, then you season with lime juice, garlic, brown sugar, herbs like thyme, basil, sage, mustard, or readymade dry rubs and marinades. Steaks should be seasoned at least 1-2 hours before cooking to enhance the flavor of the meat.

Take time to rub the seasoning on every side of the steak. A good massage can make a great difference in taste. Place the seasoned meat into the refrigerator until it is ready to be grilled. Seasoned steaks should not be kept for more than 24 hours in the refrigerator.

For preparing steaks, use stronger pellets such as Mesquite, Hickory, or Oakwood to introduce a smoky flavor to the meat. Since steaks are beefy, they can hold a nice and strong smoky flavor.

Smoking before cooking is usually done in the reverse searing method. However, this one step can bring a huge difference to the taste.

Place the seasoned steaks on low heat and let them absorb the smoke for about ½ an hour. Once the process of smoking is complete, remove the steaks from the pellet grill and proceed to the next step.

For cooking steaks, preheating is usually done at the highest setting possible. Let your grill preheat for at least 15 minutes before reintroducing the steaks.

Searing is an important part of cooking a steak. It is a process wherein the meat comes in direct contact with heat to form a beautiful brown crust on the outside. For cooking steaks on a pellet grill, look for one which has a large cooking surface and can cook food at high temperatures (preferably searing temperatures of 600 to 700℉).

Some of the best pellet grills to cook steaks are: 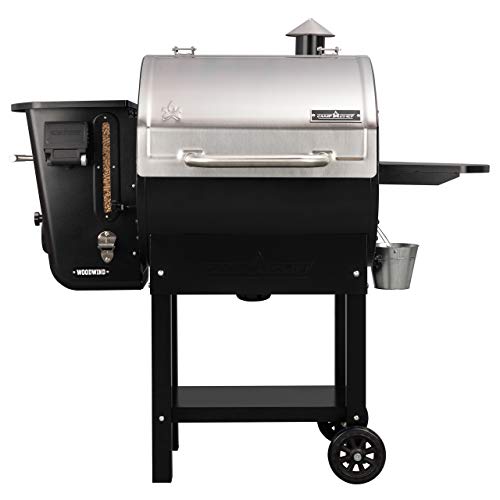 Once the oven is preheated and the steaks are properly seasoned, arrange the steaks one by one on the grill grate. When you place the steak on the hottest part of the pellet grill, a ‘sizzling’ sound will ensure that the steaks are getting seared. Sear on each side for about 5 minutes (or a total of at least 10 minutes), or until the desired internal temperature is reached.

Insert the temperature probe into the middle of the steak, avoiding the bones and large pockets of fat. Cook with the lid closed.

Similar post: What’s The Difference Between T-Bone And Porterhouse Steak?

Once the desired degree of doneness is achieved, remove the steak from the grill and let it rest for at least 5 minutes before serving (note that the USDA recommends cooking steaks with an internal temperature of at least 145℉). You can slather on some unsalted butter to improve the taste.

In the reverse searing method, the steaks are first fully cooked on the inside, and then they are seared on the outside.

Place the seasoned steaks to in a preheated oven of 180℉ to 220℉ and cook until the internal temperatures of the steaks hit 110℉. As your steaks smoke low and slow on the grill, it picks up some unique wood-fired smoky flavor which enhances the flavor of the meat. Therefore, with the reverse sear method, you get the best of both worlds – even cooking and a unique smoky flavor. However, reverse searing takes a little longer to cook compared to the traditional searing method.

Once done, you can transfer the steaks to grill grates and increase the temperature of the pellet grill to 500℉. Flip and sear the steaks on both sides (at least 4 minutes on each side) until the internal temperature of the steaks reaches 155℉ for the ‘well-done degree’ of doneness. Do not flip too often. Let the steak rest for at least 5 minutes to let the juices redistribute.

More like this: The Best Flat Top Grills for the Stove [TOP MODELS]

Whether you are planning to slice it, garnish it on top of a salad, or relish the meat as it is, steaks can be the star dish of your BBQ party. Some of the best side dishes that you can plan with steaks are mashed potatoes, grilled veggies, smoked cheesy potatoes, and fresh fruit or vegetable salad. Since steaks should be served hot, prepare the sides before cooking the steaks on the pellet grill.