Are you interested to learn the difference between the Porterhouse and T-bone steak? It can be confusing to distinguish the two since both visually look the same, but that’s far from the truth.

It is primarily American cut; T-bone steak is located in the spinal region and has the muscles least utilized. The front portion of the short loin, where the tenderloin’s narrower part is the cut, this beef cut has its name derived from the lumbar bone in a T shape that is what separates two meat pieces.

The T-bone steak combines the flavorful and meaty strip and the distinctive tender cut of filet mignon. While most T-bones are cut at a thickness of 1 inch, it’s not uncommon to find them over one and one-half inches thick.

The majority of steakhouses and restaurants cook their steaks/ beef cuts over a grill(open flame). T-bone steaks are a great cut to grill outside in the backyard. Keep in mind that the smaller tenderloin cooks faster than the other part of this double-cut steak, which is why you must try to shield it from the flame to ensure that all sides cook equally.

Porterhouses are steak cut more thickly than a T-Bone steak and comprise a significant amount of tenderloin. The porterhouse is cut from the region where the tenderloin joins the top of the loin. On the one side of the T-shaped bone is the top loin, also known as the New York Strip, and on the other is the tenderloin filet.

The US Department of Agriculture regulates that to be classified in the category of Porterhouse steak, the filet must be at least 1-1/2 inches in width between its widest edges and bone.

Porterhouse is a combination of two different cuts of beef that eliminate the need to make a difficult decision when deciding between two. There are plenty of portions when you purchase the porterhouse steak. It can sometimes weigh more than 2 pounds; the porterhouse can be served as slices or whole, depending on how you’d like to split the meat. 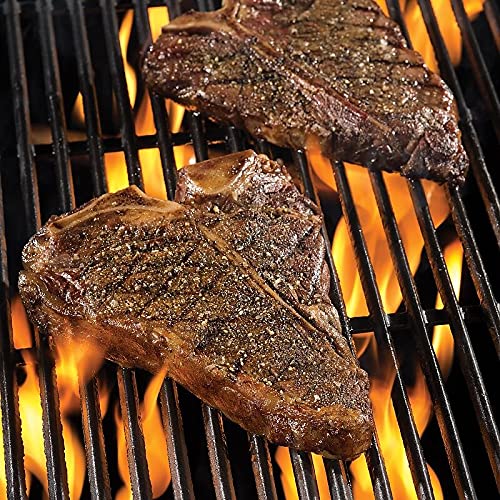 T-Bone And Porterhouse Steak: The Differences

Even though there is only a little agreement between experts and professionals regarding the size of the tenderloin to distinguish a T-bone steak from a porterhouse, the Institutional Meat Purchase Specifications have detailed a size difference.

However, steaks with a larger tenderloin are commonly referred to as”T-bone” in steakhouses and restaurants, even though they are technically “porterhouse.”

If you’re dining at home or dining out, there aren’t many things more delicious than a succulent slab of T-Bone that is perfectly cooked or Porterhouse steak served on the table. Full of protein that is vital to the development and recovery of muscles because red meat is rich in iron and vitamin B-12 which strengthens the immune system and helps keep the red blood cells in good health.

Here are the differences and similarities in nutritional value between these two beef cuts:

The steak is cut from the bottom level of a Porterhouse, which means the fat amount of the T-bone steak can remain soft while cooking. T-bone steaks can provide about 23g of protein in 3 ounces and nearly one-third of your daily Vitamin B12 intake.

It also encompasses high levels of vitamin B6, riboflavin, niacin, and beneficial trace minerals such as zinc, iron, and selenium. However, since a T-bone also contains cholesterol and fat, it should be consumed in moderation.

A single serving of T-bone steak provides a reasonable 180 to 210 calories and approximately fourteen grams of fat, with saturated fat making up about one-third of the total, contingent on how tightly the fat on the exterior is cut and the quantity of marbled fat. Remember that the typical T-bone steak weighs about 12 ounces, with larger cuts reaching 24 ounces. Therefore, nutritional content per serving must be multiplied according to the size of the steak to obtain the most precise information.

Porterhouses steak is an incredible dinner or even a massive one for those who are hungry because this cut is offered as a meal for two at most restaurants. A lot of times, it is pretty expensive and delicious.

The Porterhouse steak made from a tenderloin is a good source of protein, as do many beef cuts, and it also contains minerals, B-vitamins, and iron. Although there are generally more than 1000 calories in a pound, and porterhouse steaks typically weigh between 2 and 3 tonnes, the nutrition value for this huge steak is ultimately determined by the amount you consume.

For example, a single serving of porterhouse steak is 3 pounds, which means a porterhouse serving has between 200-250 calories. If you include baked potato and some green vegetables as a side dish to make an energizing meal, the calorie count increases accordingly.

When the nutritional value is considered, the porterhouse is very low in carbohydrates and contains around 20-25 grams of protein for each portion, 5.3 grams fat, 57 mg cholesterol, and 2 grams saturated fat. 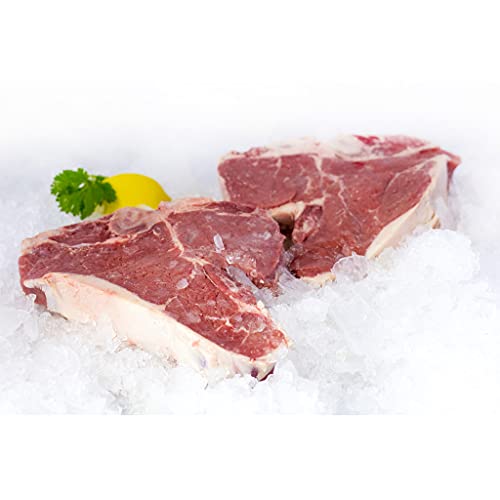 If marked USDA Prime, either cut will have the highest price; however, it is the case for nearly any cut of steaks, such as a boneless strip or rib eye, since they are considered perfect steaks with exceptional marbling. However, which cut of beef is typically the most expensive?

Due to their large filets, Porterhouse steaks are priced significantly more expensive than T-bone steaks. But, certain meats that qualify as porterhouses have large filets in one area and thin elsewhere. Be sure to pay attention to the overall size of the filet when choosing a particular one.

Eventually, the price difference between them is based on many factors, such as the quality, weight, the length of time they’ve aged, and where you purchase the products. An ounce of porterhouse or T-bone bought from a butcher is likely to cost more when compared to a portion purchased from a supermarket due to the quality you’ll get.

The porterhouse or T-bone are cooked the same way because they originate from the same portion of the cow and have identical textures. The primary difference between cooking the two will be your cooking time. The porterhouse typically takes some extra time due to the size of the filet.

Regarding how to cook each of them it is possible to choose the identical one. A porterhouse or T-bone steak is best cooked using a cast-iron skillet. It will give it that perfect sear and makes the meat a perfectly medium-rare pink. You can season the steak by adding salt and pepper before cooking it to allow it to cook evenly and create a lovely crust.

Another way to cook the steak is in an oven, wrapped in aluminum foil to ensure it is cooked to the correct internal temperature without overcooking the exterior.

Even though both porterhouse and T-bone steaks look the same, they vary based on their size/thickness, nutritional value, and how they are cooked. Porterhouse steaks contain larger filets than T-bone steaks. The USDA has strict guidelines for the amount of filet that must be present in a cut of meat to be considered the porterhouse. Therefore, they both are different cuts and meats.